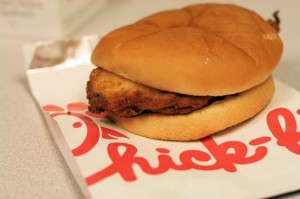 There are a few things you need to become a franchisee operator of a Chick-fil-A.

A commitment to the company. A strong belief in “wholesome values”. A willingness to endure a year-long vetting process. And it helps if you are married.

What don’t you need? A lot of money.

Chick-fil-A is, store-for-store, the most successful fast food restaurant in America, despite all of its locations being closed once a week (Sundays). And yet, to become a franchise operator, a person only needs $5,000, compared to the $1.9 million it takes to open a KFC.

Rather than looking for operators with cash, S. Truett Cathy – the company’s founder – has always focused on finding people committed to the company’s mission statement. And what is that?

“To glorify God by being a faithful steward of all that is entrusted to us,” it reads. “To have a positive influence on all who come in contact with Chick-fil-A.”

Chick-fil-A gets between 10,000 to 25,000 applicants a year from aspiring franchise operators to fill the 60 to 70 open slots that open up each year, according to www.ajc.com. As part of the application, Chick-fil-A asks candidates to disclose their marital status, number of dependents and their involvement in community, civil and religious organizations, according to southernstudies.com.

The company’s vetting process can include more than a dozen interviews with an applicant – some lasting hours – and the applicant’s family, including with their children, according to Forbes.Cathy told the magazine he is looking for married candidates (he believes they are more industrious) who are loyal, wholesome and treat their families well.

Chick-fil-A’s hiring practices have been met with opposition, as the company has been sued at least 12 times on charges of employment discrimination, according to Forbes. And yet that has done little to stop the company from becoming the most successful fast food restaurant in America on a per-store basis.

Chick-fil-A’s hiring process is like Zappos in same ways: it has a very clear culture and makes cultural fit a top priority. The results are hard to argue with, as the company is one of the most successful restaurant chains in America, despite Forbes reporting that its closed-on-Sunday edict costs the company $500 million a year.

Saying that, there are many critics to the restaurant’s hiring practices and it seems to be a lawsuit-magnet. And by looking for a certain profile, the company is potentially excluding great candidates.

Ultimately though, what makes the company successful is its top-down commitment to one, clear vision, whether you agree with it or not. And that is epitomized in its hiring practice.