How does God want to use you?

I was recently reading Matthew Chapter 27 and was struck by verses 57-60…. 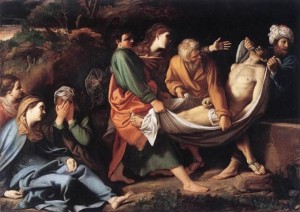 “As evening approached, there came a rich man from Arimathea, named Joseph, who had himself become a disciple of Jesus. Going to Pilate, he asked for Jesus’ body, and Pilate ordered that it be given to him. Joseph took the body, wrapped it in a clean linen cloth, and placed it in his own new tomb that he had cut out of the rock. He rolled a big stone in front of the entrance to the tomb and went away.”

It got me thinking about the authority that each of us carry in our own field of work. Here is a man, Joseph. He’s done well for himself and we don’t really know much else about his life, other than that he was a follower of Jesus. However, he had enough influence and authority to ask (and receive) the body of Jesus Christ from Pilate.

It appears that this was part of the plan for his life. He used his influence and authority for God and for good. Did he know that this would be part of his purpose eventually? To recover the body of Jesus Christ – saviour of the world? Probably not…but he ended up in that place. This begs the question…What is God preparing you for?

I believe this is what we are called to do as Christians in the marketplace. We are to use the position that God has placed us in, to glorify him.

So what influence & authority has God given you in the marketplace and are you hearing what God wants you to do next? Why not spend some time in prayer, asking God about it?

Much love and blessings,