HOW TO SHARPEN THE WINNING EDGE

A few weeks ago I was invited by a Business Edge member to have a “man to man” or “heart to heart” chat with six of his Site Managers. I asked the member for a line of direction so that we could add value to his team. He asked if I could focus on improving teamwork. 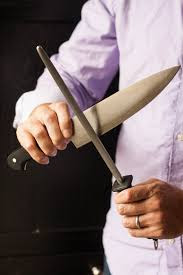 In preparation for our group “fireside chat” and with only one hour to work with I prayed hard to God as to what would be the best way to go. As is often the case with me it wasn’t until the day that I was given a sense of how to present to these fellows.

These guys are commercial plumbers and were probably very skeptical of some unknown outsider coming to tell them how to “do it better!”. I also figured that I only had one chance at the very beginning to win over their collective “let’s
really listen” attention and failure to do so would have been the end before the start of the session with a great deal of sarcasm and eye brow raising and humiliation for the member and myself.

I did not stand beside a whiteboard and look like I had all the answers. Rather, I sat as part of the group around the table. In aiming for ‘improved teamwork’ I chose to start off with “frustrations”. Rather than me telling them how frustrations are opportunities to solve problems I started by respectfully asking them what were some of the daily frustrations that they were encountering “on the job”? I clarified firstly that 1. no response would be stupid and 2. none of the responses would be slurs or attacks on each other or individuals not present.

Immediately and with enthusiasm a couple of the guys mentioned frustrations they were having. Rather than consulting and giving them the right answers, I facilitated, questioned and clarified the real problems until we had a three dimensional view of a reactive problem. Like any good facilitator I got the quieter ones to have their say too. Within minutes we had a good cross section of the day to day problems clearly laid out in an objective and respectful way.

Before seeking solutions and as an interlude I mentioned that if we can get into the habit of
continually seeking solutions to our problems it adds tremendous purpose, joy and security to our
team. This is especially important in today’s business climate where most businesses are on a war
footing just keeping their heads above water! Any business that gets good at consistently keeping
its head above water is then in the “box seat” to ride and rise with the next economic upturn or
boom when it inevitably comes. We know it is inevitable but we don’t know when.

I then encouraged them that they themselves were the most qualified (by far) to provide the correct answers to their frustrations/problems (rather than an outsider). We started defining and categorising some of the ongoing problems. Some were with fellow workmates. Some were hard to understand building plans. Some were different teams from other trades on the same site. Why, for example, was the behaviour of workmate so irritating? Could it be home life was unhappy for him. Rather than build up a vendetta against that person why not get by his side and be honest about how his behaviour is causing frustrations within the team and start searching (with common sense) to see what is really happening behind the scenes in his life.

Immediately I could see that something very beneficial was happening. This team was in positive collaboration with itself. It was almost as if I was no longer needed. As they shared their real issues it was clear that possible answers and solutions were being conceived there and then. Not only was headway being noticeably made, there seemed to be a steady stream of “light bulb” moments as some were thinking new answers to their own questions. There was also, I believe, the realisation that having a regular “round table” chat based on “the frustrations of the day” was a newly discovered vehicle to a significant improvement in teamwork.

We came to the realisation that this alone could add two or three positive degrees in workplace camaraderie, productivity, reputation and ultimately the difference between winning or loosing new business.

As a business owner, manager or entrepreneur I encourage you to firstly pray for a Godly solution and then secondly have your team get all their frustrations on the table (as above) in order to find real solutions to give your business the “winning edge”.